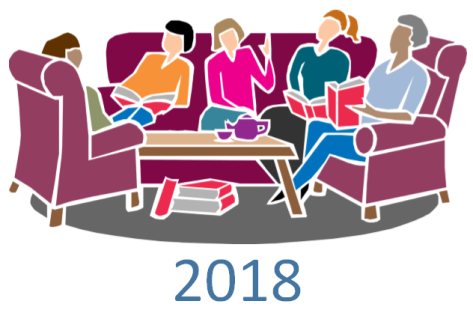 Many book clubs skip having a December meeting as it is a very busy and hectic time of year. Instead of cancelling your meeting, your group might skip reading a new book in December and recap all the book discussions you have had during the year.  Make a holiday party of it while you discover new perspectives on the books you’ve enjoyed (or not!).  With this in mind, the following is a recap of the book discussions I had the pleasure of facilitating at Syosset Public Library during 2018. You might consider one of the following for one of your own book discussions.

Follows a Viet Cong agent as he spies on a South Vietnamese army general and his compatriots as they start a new life in 1975 Los Angeles.

April 2018: My Life, My Love, My Legacy by Coretta Scott King

“This title was chosen to tie-in with the commemoration of the 50th anniversary of Dr. Martin Luther King Jr.’s assassination. Not knowing much about his widow before, I was glad to have the opportunity to read this book. It is an interesting life story told well and other discussion participants thought so too.”

The wife of Martin Luther King Jr., founder of the King Center for Nonviolent Social Change and singular 20th-century American civil rights activist presents her full life story, as told before her death to one of her closest confidants.

June 2018: A Gentleman in Moscow by Amor Towles

“My most well attended discussion of the year.  A wonderful book, one of the best I’ve read this year.”

Deemed unrepentant by a Bolshevik tribunal in 1922, Count Alexander Rostov is sentenced to house arrest in a hotel across the street from the Kremlin, where he lives in an attic room while some of the most tumultuous decades in Russian history unfold.

“This year’s Banned Book discussion choice was a surprise for me, not what I expected at all. 200 years old this year, the book is as timely now as it was then.”

Obsessed with creating life in a laboratory, a medical student haunts graveyards and dissecting rooms in search of the materials for his experiments. But when he achieves success, he rejects his ghastly creation. The creature — longing for love but shunned by all — turns evil and exacts revenge.

-all summaries from the publishers

Let us know if you have any recommendations for book discussion choices in the comments.