Now that winter is upon us, a trip to a museum or indoor garden may be just the thing to refresh your book club and beat those winter blues.   Below is a sampling of current museum exhibits that are part of SPL’s Museum Pass Program.

Museum of the City of New York

Commemorating the 50th anniversary of the death of Martin Luther King Jr., King in New York traces the civil rights leader’s encounters with New York from the 1950s until his assassination in 1968. The exhibition’s historic images chronicle King’s sermons in churches and speeches to the United Nations, his discussions about race relations with New York City’s mayor, and his relationships with New York’s own networks of activists.

Beyond Suffrage:  A Century of New York Women in Politics – through August 5, 2018

This exhibit traces women’s political activism in New York City from the struggle to win the vote, through the 20th century, and into our own times. Beginning with the long battle for women’s voting rights that culminated in 1917 statewide and 1920 nationally, the exhibition highlights women at the center of New York’s politics over the course of 100 years.

Get ready to be amazed by an exhibition filled with optical illusions and artistic sleight of hand! Trompe l’oeil, hypnotic abstractions, perceptual illusions, mind-bending impossibilities and more. Artists include Salvador Dali, Jasper Johns, Roy Lichtenstein, Vik Muniz and many others.

The Jazz Age is highlighted by masterpieces of the 1920s, neoclassical paintings by Picasso, the avant-garde breakthroughs of James Joyce and Coco Chanel and enduring classics such as Balanchine’s Apollo. The exhibition also features musical and literary programs, lectures and symposia exploring the art, design, music, dance and literature of this unforgettable era.

Mapping America’s Road from Revolution to Independence – through March 11, 2018

Mapping America’s Road from Revolution to Independence showcases hand-drawn and engraved maps from the 18th and early 19th centuries that illuminate the tremendous changes—geographic, political, and economic—that occurred before, during, and just after the Revolutionary War.

The New-York Historical Society presents a groundbreaking exhibition on one of the most controversial events of the 20th century: the Vietnam War. Populating a 3,000-square-foot gallery with interpretive displays, digital media, artwork, artifacts, photographs, and documents, the exhibit provides an enlightening account of the causes, progression, and impact of the war.

If your group is interested in any of these exhibits, our Readers’ Services Librarians would be happy to pair it with just the right book to couple your visit with a book discussion.

Museum passes can be reserved up to 60 days in advance with an adult Syosset Public Library card in good standing. Most passes admit 2 adults and 2 children.  To reserve a museum pass or to view our Museum Pass Guidelines in full detail, visit www.syossetlibrary.org and click on the museum pass icon or call (516) 921-7161 ext. 239.

*Exhibit descriptions provided by the museums. 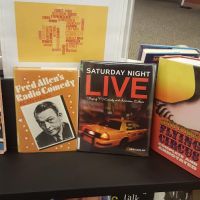